You've Been Wearing Wristbands Wrong! 5 Tips to Getting It Right.

How hard can it be to put on a wristband? Just peel open the sticky part and slap that bad boy on. Sure, it's not rocket science, but if you've ever struggled to snap on a plastic band around your wrist with one hand or have caught your arm hair in the adhesive, it's not hard to admit that maybe some level of skill could be useful. Who wants to feel handcuffed all night while trying to enjoy some drinks at a bar? Or maybe your friend helped you get your wristband on at the concert, but completely failed to align the tabs. If I wanted to get my wrists waxed I would have gone to the spa, Janice!

Luckily, there are some experts out there who can help. Enter "The Wristbanders". You know them as the hardworking point of entry personnel on the front lines of any event whose sole mission is to fit every guest and paying customers with a wristband purposefully granting them access to the sites and festivities. People who've had to wait in long, slow-moving lines to receive their wristband or have had their wristband put on too tight will agree that it's a tough and important job that could make or break the event experience. Whether you're the wristbander or wristbandee, here are some helpful quick tips to make wristbanding quick and painless! 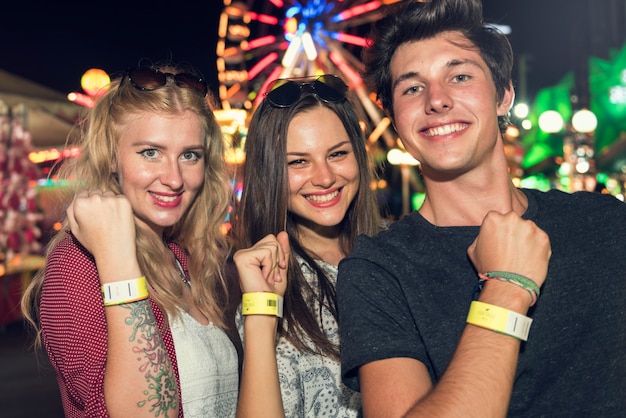 1. Hold out your wrist palm facing up.
Easy! Securing the wristband on the smoother side of the wrist will keep arm hair from getting caught in the adhesive. No more waxing, but only if the end tabs are perfectly aligned. It will take some practice to get them straight every single time, but no worries! In the event that the adhesive part of the wristband doesn’t align and risks sticking to the skin, simply fold it over.

2. Put two fingers under the band to make sure it's not too tight.
There must be a happy balance between being comfortable enough to move around, but not too loose to be easily taken off. On the flip side, a tight wristband is uncomfortable and can ruin an evening. Keeping two fingers under the band when you put it on securely will guarantee some extra space. It's important to get the wristband on right the first time. Tyvek and vinyl event bands are specifically made for one-time use so once that wristband is on if it's uncomfortable there aren't too many options for getting refitted. So unless you wanna cut it off and try again with a new band, use the two-finger method!

3. Keep a trash bin nearby for the tabs.
An event with 10,000 guests means 10,000 wristbands which result in 10,000 sticky tabs! It's a good idea to plan ahead and keep a wastebasket or other container around to keep those pesky strips of paper ff the ground. They can cause a huge mess to your event space grounds. Afraid of tabs blowing away in the wind? Consider tabless wristbands.

4. Try these different methods to deal with excess wristband.
When dealing with children or small wrists in general, you'll likely find there's a lot of extra wristband than you know what to do with. Luckily. there's a couple of different ways to go about this. Some wristbanders like to keep a pair of scissors handy to simply nip off the excess.

If there aren't any scissors around, try sticking the adhesive strip to the underside of the band instead so that the extra length of the band will stick straight up when the band is fitted on the wrist.

One final trick to keeping the extra bit of wristband out the way is to loop the wristband by sticking the tip of the tail end to the bottom half of the adhesive on the opposite side. Then put in on the receiving wrist and fold it over using the remaining exposed adhesive on the top.

5. Pull the interior part of the wristband in the opposite direction it's facing for easy removal.
Don't ruin your teeth by trying to tear your band off carnivore style! Wristbands are made from durable Tyvek paper or plastic and vinyl materials meant for long term use and won't rip apart easily. If you just pull the extra tail end of a Tyvek wristband tucked or folded under in the opposite direction, it will separate from the adhesive in one fell swoop!

These tips will make lines move quicker and guests won't be distracted with wristband discomfort allowing them to focus on the event and enjoying it to the fullest. I want to thank all the wristbanders gallantly stationed at museums, amusement centers, nightclubs, festivals and the like for taking the time to develope their brilliant wristbanding skills day in and day out. The next time you come across a master wristbander, be sure to compliment them on their craft. Get a Free Mini UV light
With a Purchase of $150 +
On any Fiberbands product.